The puzzle is presented as some HTML source to a website. It looks to be an advert pointing to Ron's personal code hosting site at http://ronscode.com.

The page is quite odd in that Ron appears to be very protective of his code hosting site and has attempted to encrypt the link. The page includes code to decrypt the link and "display" it in the href attribute of the <a> tag. The <a> tag's id is "v4". Perhaps this is version 4 of ronscode.com?

The link is encrypted using the ROT13 algorithm. Ron claims in his comment that this is version 13 of the algorithm developed in association with his colleagues whose surnames begin with "O" and "T". This suggests the following:

Those with a cryptographic bent may already have identified Ron but a Google for "Ron's code" and the number 4 will turn up the interesting fact that the RC4 stream cipher is so named because it is "Ron's Code" version 4. The Ron in questions being Ron Rivest the founder/inventor of RSA. ("RSA" itself being an initialism formed from the surnames of Ron and his co-founders.)

We now know who Ron is and maybe have a clue that RC4 may be being used somewhere rather than the somewhat less effective ROT13.

Clicking on the ronscode.com link does not lead to a website. Instead it's a file which gets downloaded.

At this point there are several ways in which the solution can proceed. One might make the leap of judgement that ronscode.com is an RC4 encrypted message. The binary file does indeed contain a RC4 encrypted message but the key is obfuscated so a brute force approach of trying to decrypt the file at various offsets using key extracted from other offsets would not work. The key is obfuscated with "ROT128" so perhaps someone making truly astonishing leaps of logic might correlate ROT13 for text with ROT128 for binary data but that seems unlikely.

The intended progression is that people realise that the initial part of the puzzle was intended to put web technologies into the mind of the solver. This is done so that the solver be guided away from spending effort thinking of other meanings for the .com suffix. Those with long memories or access to Google might recall that the COM file format is an executable format used by DOS.

Indeed ronscode.com is not a website; it is a DOS-style 8.3 filename. Those enterprising enough to load the file in dosbox will see a secret message: 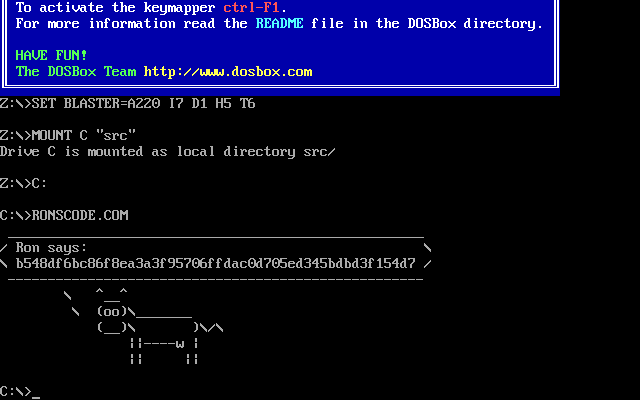 (The exact message will depend on the build of ronscode.com. The key changes with each build. Reproducable builds? Pshaw!)

Again there are multiple ways to proceed from this point. One can reverse engineer the binary to see how it manages to print out the message despite the message not being in the source. Those adept at reading 16-bit Intel disassembly will see that the binary implements an RC4 decoder and simply prints the plaintext message using the ciphertext and key embedded in the binary. (The key is obfuscated with ROT128 and included at the top of the file to be evil and stop the file utility from recognising ronscode.com as a DOS executable.)

Ron appears to have a taste for writing self decrypting code. The Javascript implementation of ROT13 is intended as a clue to indicate how ronscode.com functions as something which decrypts a ciphertext and displays it. Indeed, the key in ronscode.com is obfuscated with ROT128 so Ron's taste for ROTx algorithms shows itself again.

The message which Ron says is a hex encoded ciphertext encrypted with the same key as the cowsay message. It decodes to "What city was I born in?". Knowing the identity of Ron it's easy to look up Ron Rivest's wikipedia page and discover that he was born in Schenectady, New York.

A more sophisticated attacker being unwilling to reverse engineer the binary to find the key may attempt a "known plaintext" attack by assuming that Ron's message is encrypted with the same key as the cowsay message which handily contains a large amount of known plaintext at the beginning. The following Python script attempts a known plaintext attack by iterating through each possible offset within ronscode.com looking for the ciphertext. It assumes that the message will be ASCII and uses this to reject invalid matches. It so happens that there's only one match and that match reveals the correct plaintext.

It's hoped that the known plaintext attack is encouraged by hiding the key within the binary and obfuscating it with ROT128.