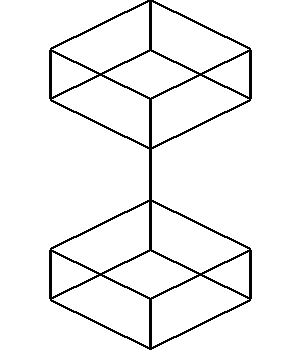 The structure of the 2012 puzzlehunt. Each line represents a puzzle, with the starting point being the top vertex and the end point the final vertex.

Wait, what on earth is a Puzzlehunt, anyway? Well, to shamelessly quote Wikipedia,
»A puzzlehunt is a puzzle game where teams compete to solve a series of puzzles at a particular site, in multiple sites and/or via the internet. Groups of puzzles in a puzzle hunt are often connected by a metapuzzle, leading to answers which combine into a final set of solutions.« So there.

The first Puzzlehunt took place on the 15th and 16th of June 2012. The structure of the puzzlehunt was chosen to be two copies of a cube graph, also known as a discrete cube, with puzzles on edges, joined by a special waypoint puzzle.

Due to the lack of precedent and sometimes haphazard preparation, a number of bumps in difficulty, execution and the interface between plan and reality were encountered. Only near the very end of the originally planned 24 hours (from 6pm to 6pm) of the puzzlehunt did anyone reach the second half. Nevertheless, the feedback we received was overwhelmingly encouraging and enthusiastic. Consequently, an extension of 6 hours (from 9:30pm to 3:30pm) for teams to attempt the second part of the puzzlehunt was granted.